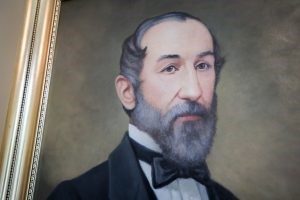 The Gorgas House Museum, as it’s now called, was built in 1828 and is the oldest surviving structure on UA’s campus.

In 1879, Josiah Gorgas, then president of The University of Alabama, and his wife Amelia Gayle Gorgas moved into the small dwelling. As years passed the house served as a private residence, campus post office and hospital thanks to Amelia, who in addition to serving in those roles became the University librarian after her husband fell ill.

The Gorgas family didn’t move to Tuscaloosa with just their good name and character. They brought furniture with them, some of which has remained intact – with help – in the Gorgas House since that time. 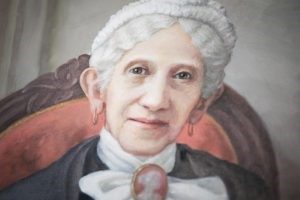 Recently, two pieces, a sofa built in the 1840s and a kneeling/prayer bench built in the 1880s, were reupholstered by the University’s Furnishings and Design Department, which provides interior design and upholstery services to the campus community.

“These are two incredible pieces,” he said. “They did an amazing job reupholstering and I’m excited to continue to work with them on getting this installation together so people can come by and take a look at the incredible work.”

Thompson said they only had to pay for the replacement material, which was covered by a donor.

“Essentially due to age, the fabric on them was wearing away, and they really weren’t exhibit quality any longer,” he said of the red sofa and prayer bench. 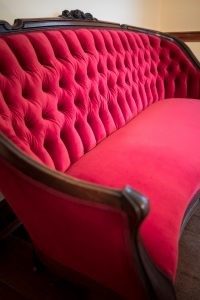 Faced with a choice of curating and storing the pieces or getting them back to display-quality standards, staff chose the latter. Started in December 2018, the upholstery work was completed about a month later.

Susanna Johnson, director of Furnishings and Design, said the original technique used to sew the sofa and bench together was not replicated in the reupholstering, but they tried to match the feel, fabric, stuffing and color as closely as possible.

“The Gorgas House upholstery renovation was such an exciting project,” Johnson said. “Michael Hand, interior designer, researched the period-sensitive color palette, fabric and type. Susan Brothers and Stephanie Lewis, two of our upholsterers, completed the intricate work in 82 hours. While the age of the pieces did present some challenges, they were successful in maintaining the original horsehair stuffing as well as the original batting, kapok.”

The sofa was originally made of rosewood and velvet. The batting, kapok, was a fibrous plant from Central and South America.

The oak kneeling bench was originally stuffed with horsehair and has been reupholstered with polyester.

“What was most interesting to learn about it was that the technique the original creators of these pieces used to sew them together was flawless, given the technology they had at the time compared to what we have today,” Thompson said. “So we have these construction techniques that we can use to tell stories of how they came to be and how they made their way here.”

Some fascinating observation they were able to make about the pieces during the reupholstering were that they had been reupholstered at least three to four times over the course of their history, and that the prayer bench had kneeling impressions in it from Amelia Gorgas, a devout Episcopalian who prayed on the bench every night before bed.

“…You can still see the kneeling impressions from Amelia from her sitting on it,” Thompson said. “They’re still there, just underneath the new improved fabric material.”

The original fabric and stuffing will be used to create a hands-on exhibit allowing people to see how these pieces once looked. The installation is now in the development phase. 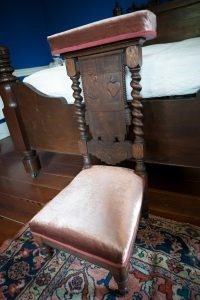 “A lot of times when you go to a museum you’re not allowed to touch anything,” Thompson said. “We’re looking on changing that. Not only are we preserving their history by maintaining samples of the pieces in a curation facility, but the remainder of those pieces that are no longer a part of them we’ll have out on tangible touching stations where you can actually come up and put your hands on the history that goes along with them.”

Museum hours are Monday through Friday, 9 a.m. to 4:30 p.m. Admission is free to students, faculty, staff and members of the University Alumni Association, and $2 for others.

To request services from the Furnishings and Design Department, fill out a design request form.

A House full of history